Presentation of the film Rosso 70 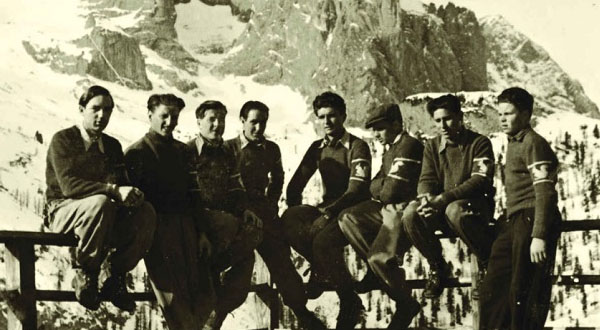 Organization: Trento Film Festival 365 and the SAT
Protagonists: In the presence of Alberto Gaspari, President of the Squirrels of Cortina and one of the directors, Vinicio Stefanello

Presentation of the film Rosso 70

Rosso 70, stories and memories of 70 years of alpinism of the squirrels of Cortina.

The squirrels of Cortina will be the protagonists on February 6th at the screening of the Trento Film Festival 365.

Protagonists in the Alpine laboratory and the Dolomites BENE UNESCO, at the SAT space in Trento.

In the presence of Alberto Gaspari, President of the Squirrels of Cortina and one of the directors, Vinicio Stefanello, the film Rosso 70 - Stories and memoirs of 70 years of mountaineering by the Cortina Scoiattoli will be shown.

Work that traces the 70 years of activity of the Scoiattoli di Cortina.

In direct testimony, there are men and walls, alpinism and life, happiness and pain, against the backdrop of a Cortina d'Ampezzo that slowly changes.

The generations change, the mountaineering and climbing changes, but not the bond that acts as a glue between past and present.

Bond consolidated by the passion for the mountains, for climbing, for the Dolomites and for their country.

A feeling that in all the 70 years of their history has allowed the Squirrels to maintain their identity.

To progress and to experiment with new horizons, so much so as to become the symbol of the city of Cortina and its mountains.

A feeling and an experience of which Alberto Gaspari and Vinicio Stefanello will speak, guests of the evening.

Vinicio Stefanello is editor of the web magazine planetmountain.com, an international portal dedicated to the mountain world.

Francesco Mansutti deals with cinema, shooting and editing since 1995.

As a director he has made numerous documentary films, short films and commercials.

In recent years he has dedicated himself to the mountain world, with works ranging from climbing to mountaineering.