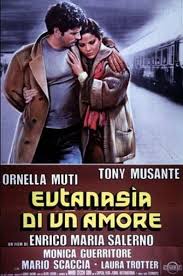 A florentine teacher has been left by an ex student, with whom he lives from time. After a while he reaches her to Versailles, but he finds her with another man. She will come back to him and confides that she abandoned him because he forced her to have an abortion. Now she wants another son, but he refuses the fatherhood; they will leave each other for ever.
Year: 1978
Directors:
Actors: Ornella Muti, Tony Musante, Monica Guerritore, Mario Scaccia, Enrico Maria Salerno, Laura Trotter
Genre:
District: Tuscany, Sardegna
Province: Florence (FI), Olbia-Tempio (OT)
Locations: Florence (FI), Golfo Aranci (OT), Arzachena (OT)