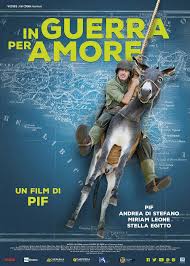 In the war for love

In guerra per amore The plot is that of a love story and the tone is that of comedy. At the height of World War II the young Arturo (Pierfrancesco PIF Diliberto) is in love with Flora (Miriam Leone). He is reciprocated, but Flora is betrothed to the son of a major boss. To be able to marry Flora, Arturo must obtain the consent of her father who lives in a small town in Sicily. To do so, Arturo, who has no economic means, find a solution. He enlists in the US Army as it prepares for landing in Sicily. Behind this story of love and the tragicomic ideas of the film, returns as underlying theme the Mafia. In a sort of prequel to the previous film. Here it is told the story of the covenant made between the Anglo-American allies and the Mafia in key anti-communist in 1943 during the landing in Sicily.
Year: 2016
Directors: Pif Pierfrancesco Diliberto
Actors: Andrea Di Stefano, Maurizio Marchetti, Miriam Leone, Pif, Vincent Riotta
Genre: Comedy, History
District: Sicily
Province: Agrigento (AG), Trapani (TP)
Locations: Cattolica Eraclea (AG), Erice (TP), Realmonte (AG)