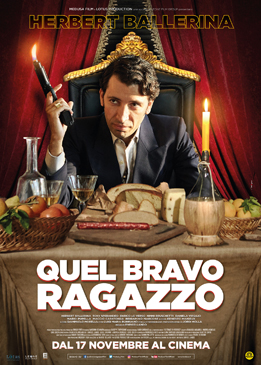 Ballerina in the film plays Leo, a young thirty-five who makes an altar boy, and that he lived in an orphanage. His life changes when he discovers he is the son of a Sicilian Mafia boss who is about to die. He decides to leave the command of the clan to his son that he never acknowledged. His son, precisely Ballerina, is far too naive and clumsy for this task. The henchmen of his father (Sperandeo and Lo Verso), helped by a treacherous lawyer (Bruschetta), try to make a real man of honor.
Year: 2016
Directors: Enrico Lando
Actors: Daniela Virgilio, Enrico Lo Verso, Ninni Bruschetta, Tony Sperandeo, Herbert Ballerina
Genre: Comedy
District: Sicily
Province: Ragusa (RG)
Locations: Chiaramonte Gulfi (RG), Ragusa (RG), Vittoria (RG)