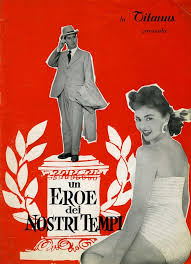 A Hero of Our Times

Oppressed by a suffocatings aunt and servant, Alberto is shy and fearful. HE is accused of committing an attack and as an alibi he accepts an affectionate widow's blackmail. To react, after finding the real guilty, he enlists the police.
Year: 1955
Directors:
Actors: Tina Pica, Giovanna Ralli, Alberto Sordi, Franca Valeri, Mario Carotenuto, Leopoldo Trieste, Alberto Lattuada
Genre:
District:
Province: Rome (RM)
Locations: