At Fano the shots of “Stregati dalla bruna” 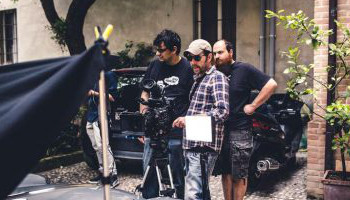 At Fano the shots of "Stregati dalla bruna"

It was Palazzo Speranza, today Fucci, to host the first ciak of "Stregati dalla luna", the movie directed by Henry Secchiaroli that sees as protagonists San Costanzo's show actors. Two days of shots, 3 involved actors and 12 technicians engaged for almost 16 hours in front of the cameras to give not only to Fano but also to all the province a unique movie project in its genre. At Palazzo Fucci the actors Massimo Pagnoni, Giovanni Giangiacomi  and Daniele Santinelli shot some scenes with a vintage car and it was rebuilt the house of one of the protagonists. (foto © occhioallanotizia.it)
Fano (PU) 2016-06-06
Redazione IMT
Condividi
Precedente At Pisa it’s being shot “Niente di serio” with Claudia Cardinale”
Succ Luca Guadagnino brings back Crema to the ’80s