Cortomontagna, winners of the third edition 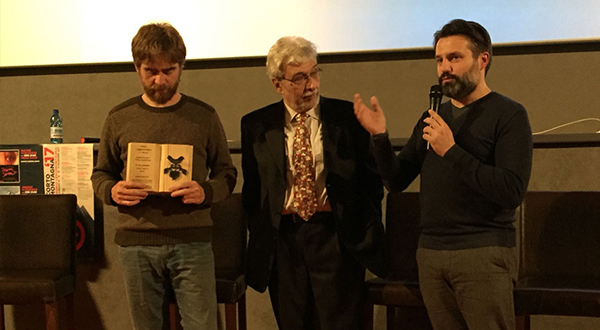 Cortomontagna, winners of the third edition

Cortomontagna, the third edition ended, with the awarding of prizes for the best shorts at the Teatro Comunale Luigi Candoni di Tolmezzo.

Continued then, with appointments directed by the president of the jury Dante Spinotti and closed with the award ceremony yesterday.

Starting from 3.30 pm on December 17th, some of the short films in competition were screened and the prizes were presented. The awards were won by three short films from three different countries in the world.

It is from Brazil the short Agora, by Mickael Couturier and Otavio Lima, where the climbing is made with a refined poetry, transforming the physical and athletic gesture into an extraordinary and incredible metaphor of life, with all the challenges and boundaries involved.

The jury's motivations have moved on the lesson of awareness, particularly appreciated; the narrow need for connection with the present, with what each of us does, is, and with what makes us happy.

Another award is Imaginador of the Spanish Xabier Zabala A., which tells the story of a man who can not think of the mountain without thinking about photography, which does not find enchantment greater than dawning that can be admired in its size only from the top of a summit.

And another prize for Italian La Roccia rosa del Pelmo by Mariaelena Zanocco, a document on the life of Barbara Feltrin.

A courageous woman who manages the Venice hut in the Dolomites with passion and dedication. Also reported in Magna Graves by Ivo Pecile and Riccarda De Eccher: Mountain by DaveStewart Brown. After the awards ceremony, the festival concluded at the New Cinema David with the screening of Jane, the documentary film by Brett Morgan for National Geographic on Jane Goodall.

The ethologist who studied chimpanzees in Tanzania for 40 years.

After the presentation at the Rome Film Festival last October, the film was screened in the national premiere just yesterday in Tolmezzo.

Tolmezzo (UD) Cortomontagna 2017-12-18
Redazione IMT
Condividi
Precedente Filming for: The Book of Vision ended in Trentino
Succ At the start of the shooting of the film by Bastolla in Cilento