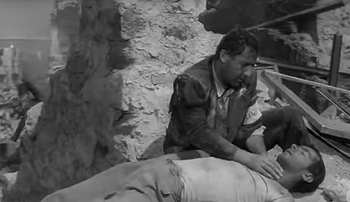 It will be screened this evening, in the Darsena Room, the film "Everybody go home!" by Luigi Comencini. The important initiative, created thanks to the work of the National Film Archive, falls on the centenary of the birth of the director. A great masterpiece marked by Alberto Sordi's unforgettable performance as second lieutenant Innocenzi. The restoration has allowed the reintegration of some fragments cut at the time the movie was released in theaters (1960). In this way you can get to see the complete edition of the film. A tribute to one of the greatest masters of Italian cinema and a great opportunity to see, in a new and richest version, one of the movies that made the history of Italian cinema. Certainly a good omen for the success of the 73rd edition of the Venice Film Festival in Venice.
Luigi Comencini Mostra Internazionale Cinema Venezia Everybody Go Home! 2016-08-30
admin
Condividi
Precedente The 21st Century’s 100 Greatest Film
Succ Films about September 8, 1943