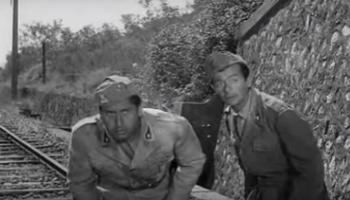 September 8, 1943 is a crucial date in Italian history.

The message read by Marshal Pietro Badoglio, Head of Government of the Kingdom of Italy, at 19:42 at EIAR microphone, with which  announces to the Italian population the entry into force of the armistice signed with the British and Americans a few days first, it represents a true watershed in the history of the country.

It's the beginning of a complex and dramatic phase, which will run until April 1945.

A phase marked by a verse from German occupation in Italy with its dark and dramatic pages and the other from the start of the long struggle of Resistance that will lead to the liberation of Italy.

The immediate more evident result, partly because of the lack of specific rules by the military commands, was the skidding if not the dissolution of the Italian army, the capture of hundreds of thousands of troops, the uncertainty of large segments of people on the margins of decision-making and communication processes.

Many films, some great masterpieces of Italian cinema, have grappled with the German occupation history and the Resistance.

Less with the period immediately followed the September 8, 1943 and on the skidding that followed.

We try to mention a few.

“The Abandoned”. It's a 1955 film by the young Francesco Maselli.

After the armistice signed by Badoglio, in the countryside of Milan (the film is shot in Ripalta Guerina, a small town of Cremona) a group of bourgeois displaced spends time in indecision between join the resistance and take refuge in Switzerland. It won the prize in the Most Promising New Director at the Venice Film Festival.

In retaliation for the killing of the head of Ferrara fascists, November 14, 1943 the Black Brigades shoot us 11 antifascists. It won the Silver Ribbon for Best Supporting Actor (Enrico Maria Salerno) and Opera first prize to the director at the Venice Film Festival.

The movie that absolute best represents this phase of uncertainty of the army and of the Italian people is "Everybody Go Home!" by Luigi Comencini (1960).

A few days ago, at the preview of the Venice International Film Festival in Venice, was presented the restored and full version of this masterpiece of Italian cinema, certainly the best of the great film director.

A film that knows how to mix without forcing irony, drama and raw representation of reality and knows really restore the climate and the uncertainties of the moment.

A film marked by the extraordinary performance of Alberto Sordi in the role of Lieutenant Alberto Innocenzi.

Other films represent this period, without achieving the results of "Everybody Go Home!

Sometimes because of the prevalence of the tone of comedy.

And 'the case of "The Two Colonels" film directed by Steno in 1962.

A film set in Monte Greco, a town on the border between Greece and Albania (actually the film was shot in Civita di Bagnoregio (VT), starring Totò, Walter Pidgeon, Nino Taranto and Scilla Gabel.

Or because the facts are filtered by distance, as in the wonderful film "Mediterraneo" by Gabriele Salvatores, Oscar winner, starring Diego Abatantuono.

Here a group of Italian soldiers sent to guard in 1941 Greek Aegean island remains isolated from any communication and discovers just casually what had happened on September 8.

Or because the historical representation of the great tragedies, like the massacre of the Acqui Division in Kefalonia operated by the German troops in retaliation to the Italian armistice with the Allies, is more functional to the construction of a pathos for sentimental dramas that the center of the narration.

And 'the case of "Captain Corelli's Mandolin", films of John Madden in 2001, starring Nicolas Cage and Penelope Cruz.