Two films,  two early works, by Marco Recalchi and Fabio Bobbio, which, despite their diversity, have the flavor of the Bildungsroman.

A little gem, by Gianfranco Cabiddu, a tribute to the theater, to W. Shakespeare and especially to Eduardo De Filippo.

What the clouds don’t say by Marco Recalchi

Antony is a 16 years old boy. He lives in California with his uncle after losing his parents in a car accident. He knows nothing about the parents. They were very young (18 old) when they met in a travel in the Europe. Now Antony wants to know where they met and where they conceived him. He has only an icon that dad and mom bought in the place where they met. He will follow the icon’s clues to find the place and to discover his past. A long journey from the U.S.A to Europe full of hardships.

Many international location: US, Slovenia, Greece. In Italy Feltre (BL) and Trieste.

The Cormorants by Fabio Bobbio 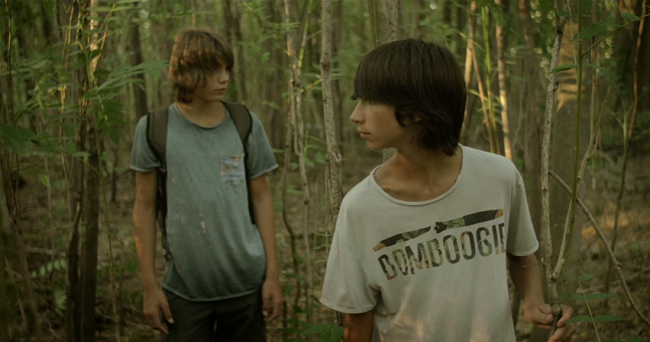 In the summer of their twelve years Matthew and Samuel spend their days between the river, the forest and the mall, but compared to previous years, something is changing.

The game gets boring, the fantasy gives way to the discovery, the adventure turns into life experience: Samuel and Matthew are two Cormorants, continuously adapting in relation to the world around them.

Summer without beginning and without end, the story of a friendship, of an age and of a territory having to change with the inexorable passage of time.

The stuff of dreams by Gianfranco Cabiddu

Camorra members fleeing and actors meet after a shipwreck on an island-prison and mingle. Under the inquiring gaze of the prison director. He imposed the shipwrecked the staging of The Tempest to identify the offenders. The love between the restless daughter of the prison director and the son of the boss. The painful figure of Caliban only surviving inhabitant of an island "occupied" from prison, for similarities and similarities with Shakespeare's text. The human stories of the characters move in the thin line that divides the real from the plausible.

The film was shot in the Asinara island.

Production by PACO Cinematografica in collaboration with RAI Cinema. Distribution by Microcinema

Christmas in the South by Federico Marsicano

Peppino, a policeman in Milan, and Ambrose, a florist in Naples, along with their beloved wives Bianca and Celeste, celebrate Christmas in the same resort town. In this holiday season the parents find that their children, Richard and Simon, are engaged to two girls of the same age: Giulia and Ludovica.

All very nice, except the four lovers ... they never met in person! Determined to put an end to this practice of "virtual love", which they just can not understand, Peppino and Ambrose convince their teens to participate in the annual event of the users meeting of the app "Cupid 2.0" for meetings that saw the blooming of love among young.

The event turns out to be a hellish pit where among former virtual users hunting for true love, a fashion blogger besotted and web influencers complexed, the two couples lose the compass undermining their marriages and the stories of their children.

What the clouds don’t say The Cormorants The stuff of dreams Christmas in the South Week-end al cinema 2016-12-03
Redazione IMT
Condividi
Precedente With the delivery of the RIFF Awards ends the XV Edition of the RIFF
Succ In Erice will be shot Aquaman, the movie by James Wan