Francesco Patierno on the set of Napoli 44 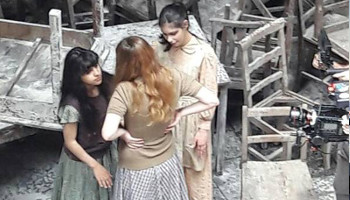 Francesco Patierno on the set of Napoli 44

The director Francesco Patierno is shooting in his city Naples a new movie. The director made shots in vico Melofioccolo at Sedile di Porto, known for the crime news but perfect for Napoli 44 by Norman Lewis, a documentary movie based on the namesake war reportage that will have Marvel hero's Benedict Cumberbatch voice over, priduced by Davide Azzolini. Greatest discretion on the set among Palazzo Amendola's ruins, noble residence today reduced to rubble populated by many popular families - already chosen by 99Posse for their video Combat Reggae - the shots in front of a baroque fountain. (foto © corrieredelmezzogiorno.corriere.it)
Francesco Patierno Naples (NA) 2016-06-08
Redazione IMT
Condividi
Precedente Luca Guadagnino brings back Crema to the ’80s
Succ At Volterra the Rising Sun’s star Ryosuke Yamada