Demetrio Casile will shoot his new film in Reggio Calabria, his hometown 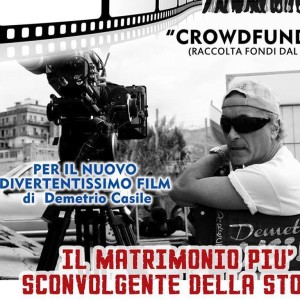 A film that will be shot entirely in Calabria with the emblematic and evocative title: "The most shocking marriage of history". The director, Demetrio Casile is from Reggio Calabria but lives in Bologna. He is director and screenwriter and has worked with directors like Comencini, Squires, Bolognini, Tessari, Michelangelo Antonioni, Wim Wenders. Casile also teaches Painting and Visual Education at the Institute of Fine Arts of Bologna and at the University Primo Levi; moreover, he's the artistic director of the Calabria Film Festival and the International Sculpture Prize "Sandoni" as well as being one of the architects of Cineshow, Salone Internazionale del Cinema in Turin. Casile has now decided to make a film in its Reggio Calabria and in the province, which intends to finance with a particular formula, the CROWDFUNDING, which allows anyone to be able to participate in and financially support the filming. Extras and actors, then, after a careful casting, will be chosen by selecting them right from the list of co-producers who participated in the fundraiser. The target figure to start with the shooting, also explains Casile on his Facebook profile, it is 100 thousand euro, and apparently really miss little to achieve, given that the initiative was a great success and already has more than a thousand members . Later, all the gains made will be distributed in proportion, based on the initial share, for all investors.
Reggio Calabria (RC) 2016-03-15
Gianni
Condividi
Precedente Rome. The filmings for “Immaturi- The Series” begin
Succ Z-survivor is the zombie movie all from Bari