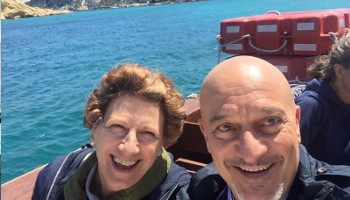 The wonderful Tremiti Islands will be again a movie set, hosting the shots of Luca Miniero's movie "Non c'è più religione". In the movie cast, that will be in the cinemas in the next months, there are famous actors as Alessandro Gassman, Angela Finocchiaro and Claudio Bisio. The movie talks about the conflicts amogn different religious communities that live on the Mediterranean island that happen when the catholic comminty can't find a child for the living nativity scene, due to the fall of the italian births. The Tremiti Islands confirm to be a movie land. The last time it happened between last August and September when on the Island it arrives the Braccialetti Rossi's troupe, a year ago it was shot the tv movie for Rai Fiction "un mondo nuovo" with Isabella Ragonese.
Alessandro Gassman Angela Finocchiaro Claudio Bisio Isole Tremiti (FG) Luca Miniero 2016-05-18
Redazione IMT
Condividi
Precedente At Sasso Marconi Antonio Pisu’s first work is shot
Succ Pasquale Falcone is filming at Cava de’ Tirreni