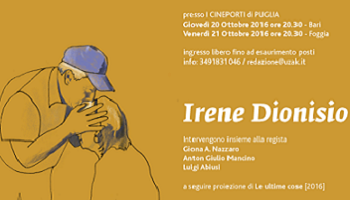 Thursday, October 20, 20:30, at the showings of Bari, new appointment of the series "Directors out of the screens."

The series of meetings, now in its fifth edition, is directed by Luigi Abiuso and produced by Apulia Film Commission in collaboration with Uzak.

Guest is Irene Dionisio. The Dionysius, one of the best Italian documentary filmmakers, has recently engaged in her first film The last things.

The film, in competition at the Critics' Week in Venice Film Festival, was released in cinemas on September 29.

To dialogue with the director there will be, in addition to artistic director Luigi Abiuso, also the film critic Giona A. Nazzaro and Anton Giulio Mancino, essayist and lecturer of cinema.