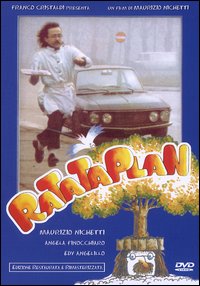 A graduated engineer adapts himself as a barman. Later he founds a shabby acting group who during the first performance have to escape due to a huge flop. He dreams to dance with a beautiful girl but, since she insn't interested, makes her dance with his alter ego robot. Suddelnly the mechanism gets stuck and the robot gets drunk. It won the Silver Ribbon as the Best New Director.
Year: 1979
Directors:
Actors: Maurizio Nichetti, Angela Finocchiaro, Roland Topor, Edy Angelillo
Genre:
District:
Province: Milan (MI)
Locations: Milan (MI), Arese (MI)