At Bari the Rocky’s parody is shot 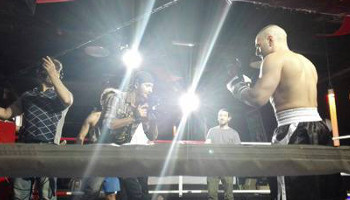 At Bari the Rocky's parody is shot

At Bari the shots of the movie "Creed'c" are underway, by the director Lucky Dario, in the cast Lino & Tiz, Frank Cippone, Manuel De Nicolò and Tiziana Schiavarelli. The feature film (produced by "ArifaFilm") is a parody of "Creed-Born to fight, Rocky spin-off came out in Italy in January, and sees among the artists busied on the apulian sets also the comedian Dino Paradiso". After the sets in Bari, they are prepared also at Triggiano, among the sport facility Kendro, the shots will continue abroad where the final scenes will be filmed. (foto © ansa.it)
Bari (BA) Triggiano (BA) 2016-04-22
Redazione IMT
Condividi
Precedente Antonio Banderas on Simbruini Mountains and at Cervara
Succ At Alghero the shots of Pupi Avati’s Christmas Presents spin-off