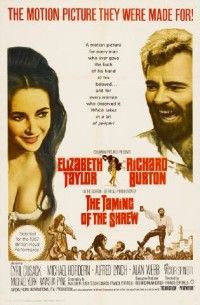 The Taming of the Shrew

Based on the play with the same name by William Shakespeare, the film tells the story of two sisters, Catherine and Bianca. Because of a ban from their father, Bianca can not marry before her sister. Unfortunately Caterina has a terrible and rebellious temper, and no one will want to marry her. Only the brave Petruccio will be able to "tame" her. The film won the David di Donatello for Best Producer, Best Foreign Actress to Elizabeth Taylor and Best Foreign Actor to Richard Burton. In addition, the film won the Silver Ribbon for Best Costume Design.
Year: 1967
Directors:
Actors: Elizabeth Taylor, Richard Burton, Bice Valori, Lino Capolicchio, Milena Vukotic, Cyril Cusack, Michael York
Genre:
District:
Province: Padua (PD)
Locations:

David di Donatello Elizabeth Taylor Franco Zeffirelli The Taming of the Shrew Nastro d'argento Richard Burton William Shakespeare 2016-02-24
Condividi
Precedente In Love, Every Pleasure Has Its Pain
Succ The Mouth of the Wolf