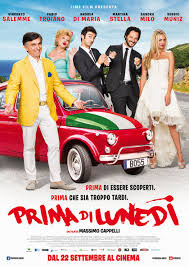 Carlito is a complex person, a perfectionist and is proud to be Italian. He has got old cars of all colors and a chain of supermarkets. We are in a mid-afternoon in August, in a deserted Turin. Carlito has to deliver a very attractive Easter egg ... Marco and Andrew are inseparable friends, linked by Penelope, sister of Andrew and former girlfriend of Marco. They are driving on the same road Carlito is driving on with its 500 green. Penelope is getting married. Mark - who is driving - was not invited. He is anxious to convince his friend that does not care about the wedding and Penelope. But ends up straight against Carlito's car. Now the two are indebted to Carlito. Begin the hilarious adventures.
Year: 2016
Directors: Massimo Cappelli
Actors: Fabio Troiano, Martina Stella, Sandra Milo, Vincenzo Salemme, Andrea Di Maria, Sergio Muniz
Genre: Comedy
District: Campania, Latium, Piedmont
Province: Cuneo (CN), Naples (NA), Rome (RM), Turin (TO)
Locations: Alba (CN), Bastia Mondovì (CN), Carrù (CN), Cavallermaggiore (CN), Fossano (CN), Mondovì (CN), Naples (NA), Rome (RM), Turin (TO)