Christmas as a chef, the cinepanettone returns 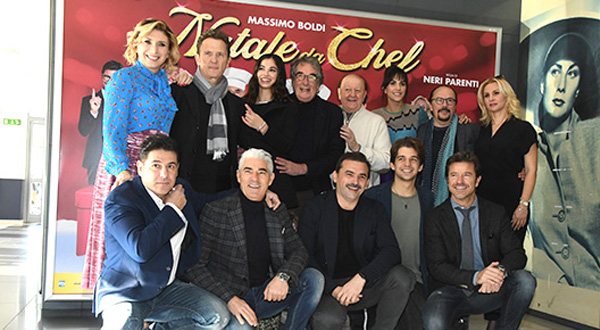 Christmas as a chef, the cinepanettone returns

Christmas as a chef, the cinepanettone formed by Massimo Boldi, who, on the wave of culinary talent's success, interprets an aspiring pastry chef in "Natale da Chef".

Very rich cast of the film that includes among others Biagio Izzo, Dario Bandiera, Rocío Muñoz Morales, Francesca Chillemi, Barbara Foria, Maurizio Casagrande, Enzo Salvi, Milena Vukotic and Paolo Conticini who, as revealed by Neri Parenti, all had to try their hand together Boldi with the difficult art of cooking.

Gualtiero Saporito is a great chef ... but only in his mind!

In fact with its daring mix of ingredients, cooking only junk! But Gualtiero does not give up and insists on proposing his kitchen on every occasion, receiving only insults and doors in the face.

But his tenacity, one day, is rewarded. Will it be Christmas at the door? Furio Galli, owner of a very famous catering company, offers him the position of head chef in the brigade that will participate in the tender called to "feed" the next G7.

But Furio's design is obviously shady. In fact, to save his company on the brink of bankruptcy, he promised his opponent to let him win in exchange for a "big gift".

Gualtiero will thus find himself struggling with a chef who does not feel the flavors, an abstemious sommelier and a pastry chef who leaves the cakes ... instead of preparing them! Between exchanges of person, dish and "disapori" bellyache is guaranteed ... laughter!

In Trentino the shooting of the new cinepanettone signed by Neri Parenti "Natale da Chef" with Massimo Boldi.

After having immortalized Arco, Riva del Garda, Val di Ledro, Drena and Mezzocorona, the "Natale da Chef" troupe arrives in the heart of Trento to finish the process.

"This is in my third film in Trentino - says Neri Parenti - but while the first two saw in Trentino they are a partial setting, for Christmas by Chef Trento is the protagonist. The story is in fact focused on a tender for the allocation of the catering service in view of the next G7 that we have simulated will take place in the capital. "