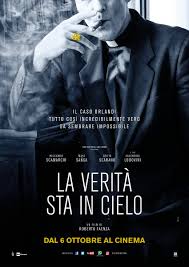 La verità sta in cielo Was 22 June 1983. The fifteen Emanuela Orlandi, Vatican City citizen, daughter of a clerk of the Prefecture of the Papal Household, disappears under mysterious circumstances. An escape? A kidnapping? It's been over 33 years since that day, but on that story hasn't never been done definitely light. Indeed, the episode quickly became one of the darkest cases of the Italian and Vatican history story. At the center of the various investigations and investigative hypotheses have been from time to time large or dark powers. From the Vatican to the IOR, to the Magliana Gang, the Banco Ambrosiano, the secret services of different countries. But a conclusion has never arrived. Yet that episode, many years later, continues to arouse passions, controversies. With the film The truth is in heaven by Roberto Faenza, the spotlight is on again on the matter.
Year: 2016
Directors: Roberto Faenza
Actors: Greta Scarano, Maya Sansa, Riccardo Scamarcio, Valentina Lodovini
Genre: Drama, Thriller
District: Latium
Province: Rome (RM)
Locations: Vatican City, Rome (RM)